East Texas is dominated by the Piney Woods, a dramatic region of soaring pine trees. In the spring, azaleas and dogwoods bloom into bright colors, and during the fall, the landscape is transformed by a riot of colorful sassafras, sweet gum, elm, oak, maple, and persimmon trees. In all seasons, this area is one of the state’s most beautiful and ecologically diverse. 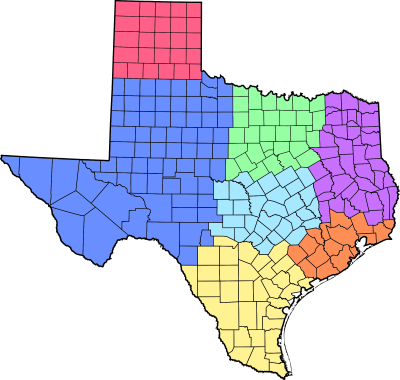 The area is known for its outdoor activities including hiking, camping, fishing, water sports, and more. East Texas is home to a large number of state and national parks and reserves, including the Angelina National Forest, the Big Thicket National Preserve, the Anahuac National Wildlife Refuge, and the Sabine National Forest, among others.

While other areas of Texas are strongly influenced by the German and Central European immigrants of the 19th and 20th centuries, Texas cowboy culture, and exchange with Mexico, East Texas’ roots can be found in the old Southern plantation tradition. Many old plantation towns in East Texas offer old-fashioned carriage rides, paddle-wheeled riverboats, and magnolia-shaded plantation homes to explore.

East Texas also has a strong historic tradition of oil development. Towns such as Longview, Marshall, and Kilgore celebrate the days of the oil boom with historical attractions and museums that offer a wealth of information about this period in Texas history—and its impact on the wider country.

The area is also rich in ancient history. Nacogdoches, one of the oldest cities in the state, was once a Spanish fort and the site of one of Texas’ brief republics. It provides an interesting glimpse into Texas history during its fight for independence. In addition, the Caddo Mounds State Historic Site, located in Alto, offers fascinating archaeological remains from the area’s ancient Native American inhabitants.

East Texas is a striking and fascinating area to visit, rich in history and natural beauty. Whether you’re looking to get to know the state as a visitor or settle for the long term, this region is certainly worth exploring.