Financial Fall-Out of Divorcing After 50 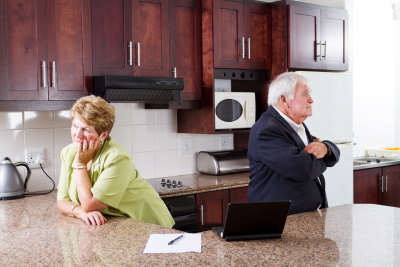 If you're an older couple divorcing after a long-term marriage, it's referred to as a gray divorce or late life divorce.

Divorce can be a devastating event for any family. For older couples, however, it can be particularly difficult. Here are a few challenges and pitfalls to consider if you’re approaching divorce later in life.

You don’t have as long to recover financially.

There's less time to recoup losses, pay off debt, and weather stock market gyrations. After a divorce, household income drops by about 25% for men and more than 40% for women, according to U.S. government statistics.

These concerns are magnified for women. After a divorce, household income drops by about 25% for men and more than 40% for women, according to U.S. government statistics. What's more, as women’s life expectancy climbs into the 80s, a divorced woman can find herself living a lot longer with a lot less.

Divorce can be expensive. In addition to legal fees, you might have to give a large chunk of the wealth you’ve accumulated to your partner during the settlement. For younger people, there’s still time to build their lives back up again financially. Older people don’t have another few decades of prime earning time to waste, and a divorce at a later age can hit older adults hard.

If you’re retirement age, you may have less money to support yourself with after retirement—and a lesser degree of financial security—after a divorce.

Your retirement fund can suffer.

Many older couples choose to split retirement funds down the middle. However, this often doesn’t leave enough for either partner to survive on by itself. This means both partners might have to get back to work. This is not as easy for older adults, however—as there is still significant age bias in the hiring market.

Your Social Security payments could be affected.

Depending on your finances and your age, you may be able to draw on Social Security for support during your divorce. If you were married for at least 10 years before the divorce, and divorced for at least two, you may be entitled to Social Security through your former spouse. These payments do not decrease the amount paid to the former partner. You have to qualify, however. You must be at least 62 years old and not eligible for Social Security benefits under your own earnings. If your former spouse dies, you may qualify for survivor benefits under similar circumstances.

You could lose your health insurance.

With both younger and older couples, one partner often gets healthcare benefits through the other’s employer. When a divorce happens, this can leave partners of any age uncovered. However, losing coverage can be particularly tough on older people involved in a divorce. The older you are, the more difficult it will be for you to get individual coverage on your own—and the more expensive it will be.

It becomes more important to keep the house.

As you get older, keeping the house becomes more important. At age 62 or older, you qualify for a reverse mortgage, which could help you support yourself in retirement. Because your funds will likely be depleted after a divorce, however, it’s important to do the math and possibly talk to a financial advisor about whether either you or your former partner can afford to keep the house.

Your kids are less dependent.

If you have children, chances are they’re adults now—and hopefully out on their own. A divorce won’t affect them the same way it would have as children, but it can still have an effect. You may still face some resistance, resentment, and challenges from your children as you move through the divorce.

Getting divorced isn’t easy at any age. It can be particularly challenging for older adults, however. Talk to a divorce attorney or financial advisor, and hopefully you’ll be able to overcome the pitfalls of a later-in-life divorce.