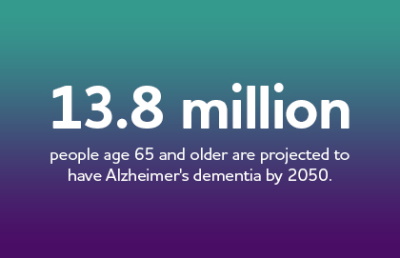 An estimated 5.8 million Americans age 65 and older are living with Alzheimer's dementia in 2020. Eighty percent are age 75 or older.

Alzheimer's is a complex disease that progresses over many years, like diabetes, heart disease, and other chronic conditions. A number of  may increase or decrease a person's chances of developing the disease. Women get the disease more often than men. Family history. People who have a parent or sibling with Alzheimer's are more likely to get it themselves. These risk factors include age, family history and genetics.
| 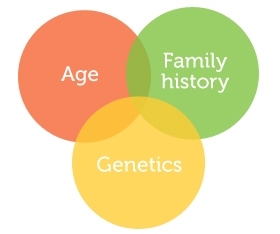 Age is the best known risk factor for Alzheimer’s disease. The risk of developing the disease doubles every 5 years after age 65. Alzheimer’s becomes increasingly common as people reach their 80s, 90s, and beyond. These facts are significant because the number of older adults is growing.

The U.S. Census Bureau estimates that Americans 65 and older will grow from 13 percent of the population today to nearly 20 percent in 2030. The group with the highest risk of Alzheimer’s—those older than 85—is the fastest growing age group.

Another strong risk factor is family history. Those who have a parent, brother or sister with Alzheimer’s are more likely to develop the disease. The risk increases if more than one family member has the illness. When diseases tend to run in families, either heredity (genetics), environmental factors, or both, may play a role.

Early-onset Alzheimer’s is rare, accounting for only about 5 percent of people with the disease. Its symptoms usually appear when people are in their 30s, 40s, and 50s. Most cases of early-onset Alzheimer’s are familial, caused by mutations (permanent changes) in one of three known genes inherited from a parent.

Late-onset Alzheimer’s disease, the most common type, typically becomes evident after age 60. The causes of late-onset Alzheimer’s are not yet completely understood, but researchers have identified several risk-factor genes. One of those genes, called apolipoprotein E (APOE), has three forms, or alleles (ε2, ε3, and ε4).

One form, APOE ε4, increases a person’s risk of getting the disease. It is present in about 25 to 30 percent of the population. However, carrying APOE ε4 does not necessarily mean that a person will develop Alzheimer’s, and people without APOE ε4 can develop the disease.

Scientists have identified a number of other genes that may increase a person’s risk for late-onset Alzheimer’s. More studies are needed to assess the role these genes may play and to search for additional risk-factor genes. Knowing about these genes can help researchers more effectively test possible treatments and prevention strategies in people who are at risk of developing Alzheimer’s—ideally, before symptoms appear.