Signs and Symptoms of Dementia 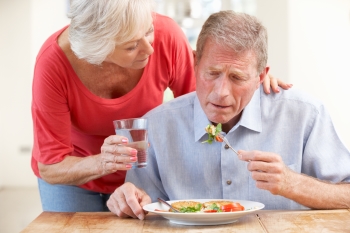 Early-onset Alzheimer's is an uncommon form of dementia that strikes people younger than age 65. Of all the people who have Alzheimer's disease, about 5 percent develop symptoms before age 65. So if 4 million Americans have Alzheimer's, at least 200,000 people have the early-onset form of the disease.

"A Marriage to Remember" is an Alzheimer's Disease Documentary, by filmmaker Banker White's about his mother who was given a diagnosis of early-onset Alzheimer's disease at just 61 years of age.

Although signs vary common early symptoms of dementia include:

Approximately 200,000 people every year receive the diagnosis; that's approximately 5% of the total population of people with Alzheimer's in the United States.

It can be difficult to get the correct diagnosis, however. Many health care providers don't immediately suspect Alzheimer's disease when faced with a younger patient. It's not unusual for patients to be told that their symptoms are due to stress or other underlying causes or to receive very different opinions from different medical professionals.

The Importance of Getting Tested

The easiest way to know whether or not you have early-onset Alzheimer's is to get tested. A positive result could mean having more time to prepare your family, your finances, and yourself; it could also mean difficulty in getting health, long-term care, life, and disability insurance, even before you start developing symptoms.

Finances can be a problem for many people who develop early-onset Alzheimer's and their families. The disease can often make it difficult or impossible to hold down a full-time job, and it isn't unusual for spouses and partners to quit their jobs to step into a full-time caretaking role. There are medical benefits and programs that can help, but often they do not kick in until the Alzheimer's patient is 65 or older.

Steps to take while symptoms are still mild:

Your first priority should be to sit down with a financial planner to get your finances and retirement situation in order, and a lawyer to make sure that the right person has power of attorney and your assets are distributed in the right way. You may need to sign the deed to your house or property over to your spouse or another close family member or loved one.

You should also sit down with your employer to explore your options for early retirement. It's possible that you may be eligible for retirement benefits even though you will be retiring early.

It is also a good idea to talk to a counselor about your Social Security, Medicare, and Medicaid options. You may be eligible for some benefits even though you will be under 65 years old when you need them.

It's crucial to talk to your family about the diagnosis and what it will mean for them. You will need to plan for the time when your symptoms get more severe, and for what to do if your family can no longer provide you with the care you need.
Finally, know that you are not alone be sure to get in touch with the support organizations in your area that can help you plan how to manage early-onset Alzheimer's.