What Is the Difference?

Is Alzheimer's a Form of Dementia?

The words "Alzheimer's" and "Dementia" are often spoken of, even by medical professionals, as though they are essentially the same thing. The truth is that both diseases are poorly understood, and the symptoms are similar enough to make them easily confused, even by doctors.The confusion is easy to understand, and dementia and Alzheimer's may look identical at first.

They both include symptoms such as impaired cognition, communication, and motor function, and they both are more likely to affect older adults, although they can occur in younger patients as well.

However, they also have significant differences that are important to understand, especially if you have a loved one who has or may have one or the other.

Is Alzheimer's a Form of Dementia?

Alzheimer's disease is a type of dementia that causes problems with memory, thinking and behavior. Symptoms usually develop slowly and get worse over time, becoming severe enough to interfere with daily tasks.

What is Alzheimer's Disease?

Alzheimer's is a type of dementia that affects memory, thinking and behavior. Symptoms eventually grow severe enough to interfere with daily tasks.

Alzheimer's is the most common cause of dementia, a general term for memory loss and other cognitive abilities serious enough to interfere with daily life. Alzheimer's disease accounts for 60-80% of dementia cases.

Unlike some other forms of dementia, Alzheimer's is not curable, and the damage it causes is permanent. One symptom of the disease involves abnormal protein deposits in the brain, which cause hardened plaques and tangled nerves. This disrupts brain functioning, and can even cause the brain to shrink in severe cases.

Doctors can tell whether patients have Alzheimer's disease or another type of dementia by using a series of screenings, including brain scans, blood tests, and evaluations of the patient's mental functioning.

However, no test is completely accurate except a manual check for abnormal protein deposits in the brain, which can only occur during an autopsy after death. Approximately 90% of diagnostic tests outside of an autopsy are accurate.

What It Is Dementia?

As scary as it sounds, a diagnosis of dementia is not always terrible news. Dementia can be caused by a variety of problems, sometimes something as simple as a vitamin deficiency, or a reaction to a new drug.

Some forms of dementia can be cured as easily as adjusting a medication prescription or adjusting diet, and may not have permanent effect - especially if the problem is caught in time.

Dementiať doesn't refer to one specific disease. Instead, it refers to a whole host of ailments that affect thought, communication and daily functioning. Diseases categorized under "dementia"ť often come with serious cognitive declines and the degradation of memory.

However, there are some differences if you know what to look for, especially in the early stages. Early Alzheimer's disease, for example, is usually characterized by forgetfulness. Other symptoms can include repetition of the same stories and questions, often word for word; confusion; and changes in personality.

Vascular dementia, which can occur after a heart attack or stroke, is characterized by a marked impairment in judgment in the early stages, although symptoms can vary depending on the part of the brain affected by damaged blood vessels. 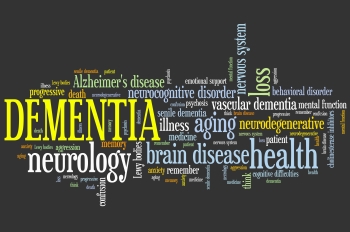 Frontotemporal dementia, which is a degeneration of the cells in the brain's frontal lobes caused by a variety of rarer diseases, is typically characterized by changes in personality in the early stages.

However, the difference between all of these and other causes of dementia can be subtle, even in the early stages, they tend to look more similar as the disease progresses. Usually, when a patient receives an initial diagnosis of dementia, they are getting diagnosed for a set of symptoms, such as when the doctor can see there's a rash, but does not know whether the underlying cause is a disease, an allergy, or some other ailment.

Doctors can identify the impaired cognition, functioning, or communications that come along with dementia, but it takes more work to discover what is causing these symptoms.

In summary, dementia and Alzheimer's disease can look very similar, but they are not the same. Simply put, Alzheimer's disease is one out of many causes of dementia. Not all types of dementia are a life sentence, but Alzheimer's is a disease that affects patients for the rest of their lives, and is one of the worse diagnoses to get. Unfortunately, it is also the most common. Even so, knowing the differences between these two terms can help you plan for the future and understand the progression of your or your loved one's disease.